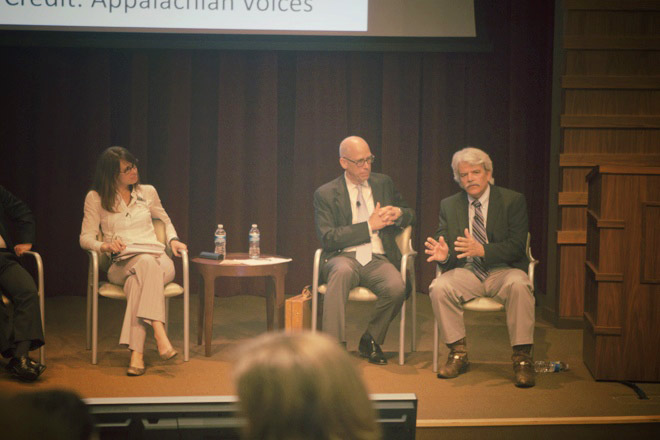 Charlotte – Attendees at Tuesday evening’s public conversation regarding public water quality in Mecklenburg County discussed the community’s various concerns.  In recent months, the environmental impact of commercial activities adjoining the Catawba river watershed has revived conservationist alarm in the shape of zealous appeals to regulatory reform.  Reports state frequent, worrisome levels of toxic elements in proximity to the drinking water supply chain, caused by commercial development runoff and that of chemical engineering byproduct waste.  11 man-made “ponds” are connected by the Catawba River, the natural relaying cycle of which urban center infrastructures could not exist without. 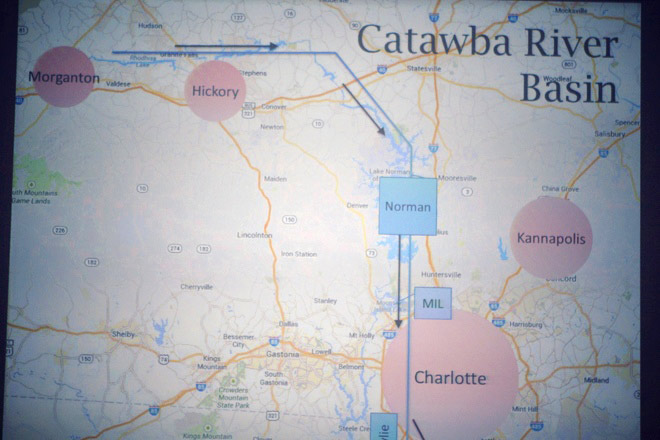 Lisa Miller, WFAE news reporter and evening host, welcomed Rusty Rozzelle, water quality program manager at Charlotte-Mecklenburg Stormwater Services, Rick Gaskins, executive director at the Catawba Riverkeeper Foundation, also Joe Padilla, executive director at the Real Estate and Building Industry Coalition and – last but not least – Barry Gullet, director at CMUD, the Char-Meck Department of Utilities.  Panel guests began discussing how water quality rates in Mecklenburg county.  Rusty related how the state regulates 300 miles of stream and offered an 72%–74% estimate of impaired resources.  It was debated that, considering the presence of mercury found throughout (80% of which comes from burning coal) some consider this estimate less all-encompassing.  Mercurial Mecklenburg county fish advisories have been put in place; state epidemiologists estimate that a great number of children are born with disabilities each year because of this contamination. 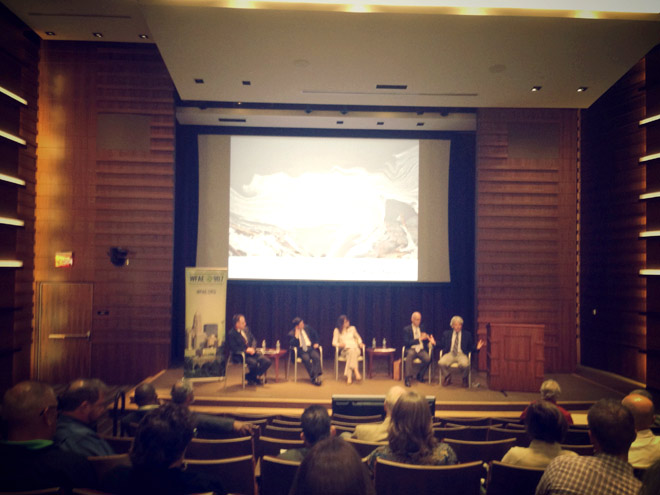 >The panel focused the conversation on the role of builders and developers.  Mr. Padilla mentioned significant regulations on multiple occasions and also that runoff from construction is 1.5% of total compared to the EPA estimates of urban runoff being 5%-7%.  With the myriad of regulations from the federal down to the local level how much more regulation is needed, he asks, and at what additional cost is there a balance to be made between environmental protection and community enrichment?  “Finding ways to incentivize [for green development] is the next step, how we encourage projects to stay within the urban core.”  Development has outpaced infrastructure, there are serious risks. 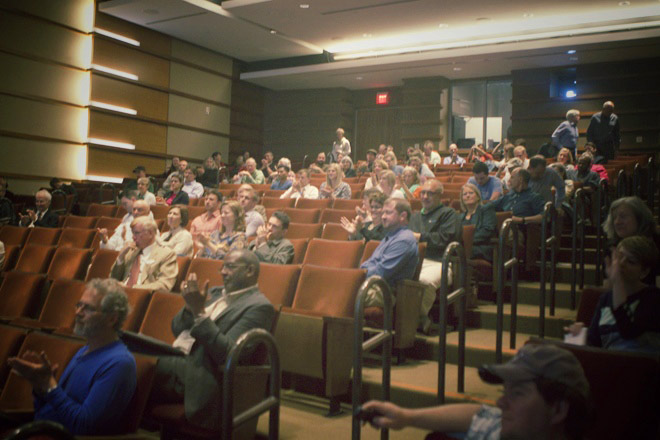 Mr. Gullet spoke with confidence regarding his department’s ability to produce good water. He spoke of the county’s 5 treatment plants that provide the highest level of certified treatment, perform over 150,000 tests per year and regularly exceed quality minimum requirements.  Rick Gaskins shared thoughts from the other side of the coin in his response to Mr. Padilla’s remarks.  Agreeing that a good, clean environment is beneficial to development, business and a greater community, disagreeing that current building codes and regulations adequately protect the environment.  Smarter building and redevelopment practices would include enlarged buffers to protect green ways along the river from polluted sedimentary runoff. 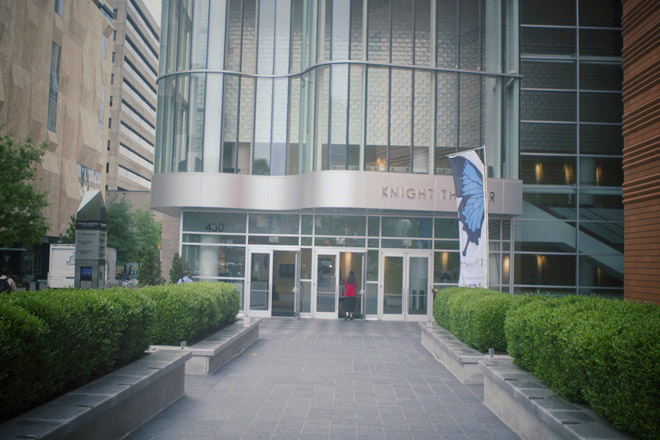 One of the first questions from the audience was that of David Robinson (Sierra Club), and Rusty and Joe shared their opinion on the merits of pervious versus impervious asphalt,  in turn.  Prompted by a member of the audience questioning a rumor that the city had disposed of biosolids on nearby farmland, Mr. Gullet explained how on September 23rd, 2013 an illegal waste dump containing PCBs in Spartanburg, South Carolina put all waste water plants on alert and relating the city’s statement that PCBs were never applied to farmlands and that they stopped land applying procedures.  Though a lot of them still exist in some electrical transformers and in a lot of industrial equipment, since 1979 the PCBs have been banned.  After the illegal discharge in September it cost $1.3 million to properly assess the contamination at CMUD and will cost more once it is time to transport the sludge containing the toxins to a hazardous waste field in Alabama. 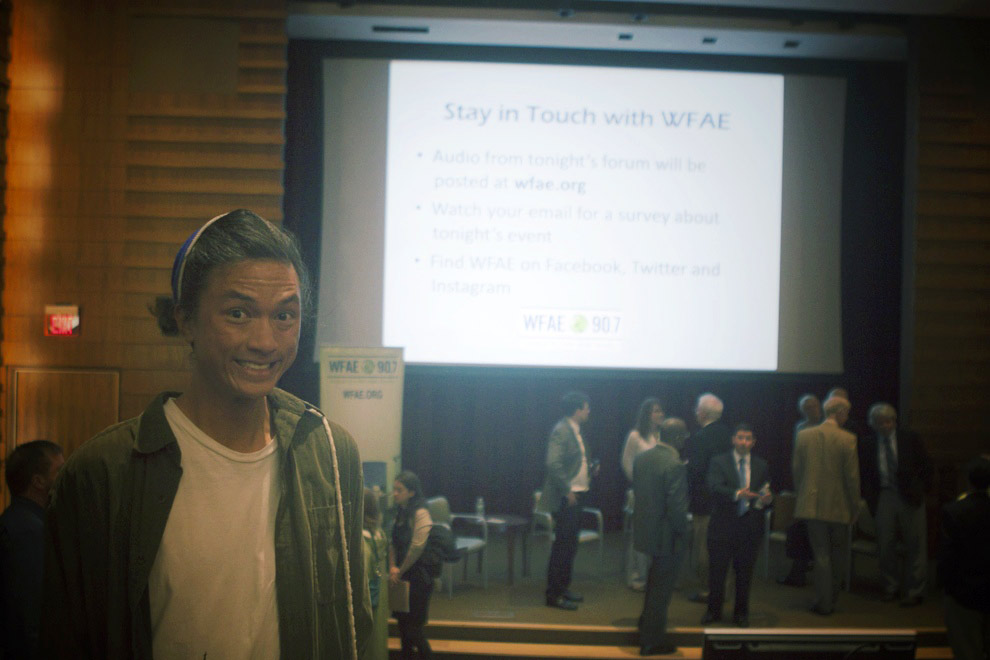 Allen Banks from the Freedom Park association expressed concern for infield housing development.  He described recent changes the result of highly concentrated building in his neighborhood, the lack of adequate silt-fencing and widespread hardened surfaces.  Another question began: “I am deeply concerned that Duke Energy was allowed to…”  An audio recording of the event is available online, care of WFAE.  Thanks to WFAE for hosting this event that took place at Wells Fargo Auditorium at Knight Theater, Tuesday evening from 7–8:30pm.